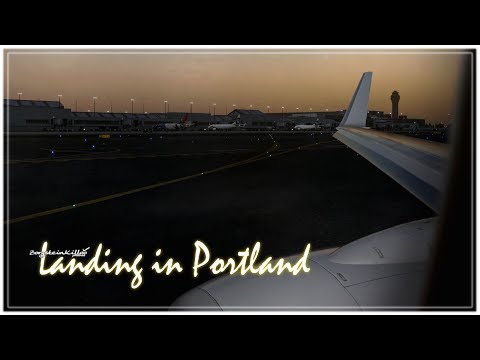 Прибытие в сценарий Портленда от Flightbeam!
Portland International Airport (IATA: PDX, ICAO: KPDX, FAA LID: PDX) is a joint civil–military airport and the largest airport in the U.S. state of Oregon that accounts for 90% of passenger air travel and more than 95% of air cargo of the state.It is within Portland's city limits just south of the Columbia River in Multnomah County, 6 miles (10 kilometers) by air and 12 mi (19 km) by highway northeast of downtown Portland. Portland International Airport is often referred to by its IATA airport code, PDX. The airport covers 3,000 acres (1,214 ha) of land.
Portland International Airport has direct flights and connections to most major airports throughout the United States, and non-stop international flights to Canada, Germany, Iceland, Japan, Mexico, the Netherlands, and the United Kingdom. The airport is a secondary hub for Alaska Airlines and Horizon Air, with Seattle–Tacoma International Airport as the primary hub. It is also a maintenance facility for Horizon Air. General aviation services are provided at PDX by Atlantic Aviation.The Oregon Air National Guard has a base on the southwest portion of the airport property grounds, and is also the host unit of the 142nd Fighter Wing (142 FW), which operates the F-15 Eagle. Local transportation includes the MAX Red Line light rail, which takes passengers between PDX and downtown Portland, as well as farther west to Beaverton, Oregon. There is also Interstate 205, which connects to southwestern Washington (north from PDX) along with many suburbs of Portland (south from PDX).
PDX receives top honors among many polls: 2013 Travel + Leisure magazine readers' poll for best US airport; Condé Nast Traveler in 2006, 2007, 2008, and 2010, top airport for business travelers; #1 in 2015, 2016, and 2019 by J.D. Power and Associates for U.S. "Large Passenger Airports" and overall highest amongst passenger satisfaction; the 2015 ALPA Airport of the Year.