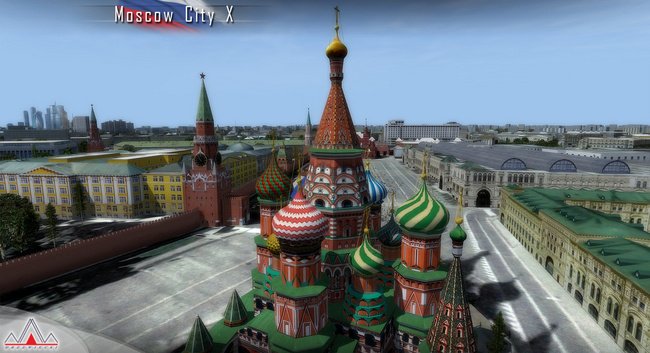 - Screenshot 2
- Screenshot 3
Moscow City X Demo is a very detailed model of Moscow metropolitan area in Russia, together with lite sceneries of 7 airports (UUWW Vnukovo, UUDD Domodedovo, UUBW Zhukovski, UUMO Ostafyevo, UUBM Myachkovo and UUMB Kubinka), many heliports and thousands of buildings. This product is fully compatible with FSX/FSX:SE/P3Dv1/P3Dv2/P3Dv3/P3Dv4 and FSW by Dovetail.

It's a fully functional DEMO version of the commercial payware product, copmatible with both UUEE Moscow Sheremetyevo X by Drzewiecki Design and UUDD Moscow Domodedovo FSX/P3D by MDesign. It features same airport layout as in the full version but with limited 3D objects and low resolution textures. Using this free demo ensures no problems with online (VATSIM, IVAO, multiplayer etc.) flying in case some users use the payware scenery and some don't.

Moscow is the capital city and the most populous federal subject of Russia. It's the second most populous city in Europe after Istanbul and the 8th largest city proper in the world, as well as the largest amongst high income economies.

It's equipped with an automatic installer, which means that the scenery will be automatically added to the Flight Simulator Scenery Library.

Please uninstall all previous versions of the airports included in this package that you may have installed before. Please make also sure that no duplicated AFCAD files are installed!