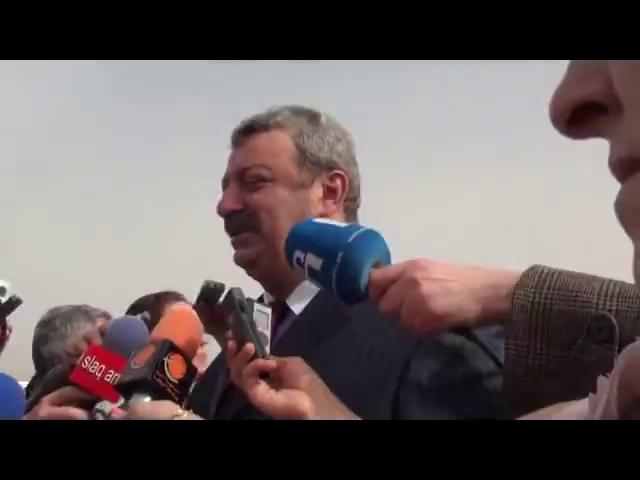 - Screenshot 2
- Screenshot 3
At the international airport Zvartnots in Yerevan on 19 April, a solemn welcoming ceremony and presentation of the first Sukhoi Superjet 100. The ceremony was attended by the owner of Armavia Mikhail Bagdasarov, Director General of Sukhoi "Mikhail Pogosyan, Russian Transport Minister Igor Levitin, and other officials. As noted in an interview with journalists Michael Bagdasarov aircraft worth $ 24 million, it is designed for flights at short distances. Another such aircraft with a capacity of 98 seats will get the company in June this year, and if the results will justify itself in the coming year will be purchased 3 more aircraft. The company also plans to buy other aircraft. Bagdasarov assured that the new aircraft will contribute not so big, but still significant decrease in the prices of airline tickets. «Sukhoi Superjet 100 is designed for missions lasting 1,5-2 hours, it will make flying to Moscow, Sochi and cities of Ukraine", - said the owner of Armavia. On the question of when the first scheduled flight of "novice", Bagdasarov said that most likely he will be held tomorrow, 20 April, and, probably, in Sochi.
→ Size: 47 MB
→ Date: 11 years ago (21.04.2011 20:00)
→ Author: Arm_O
→ Uploaded by: Arm_O (uploaded 5 files )
→ Approved by moderator: SLAVJAN
→ License: Freeware - Free version, Unlimited Distribution
→ Downloaded: 93 time(s)
Watch Online Comments 151 View ZIP-Content Download
+8
5
Super! Finally happened! SSJ-100 cool airplane, the more I look at it the more they admire. I hope he will meet the expectations! Hooray! Hooray! Hurrah! It remains to construct a good MS-21! PS to the middle of the video looked beautiful Tu-154 and the SSJ-100, like grandfather and grandson )))))) PSS was only please inappropriately raise controversy that SSJ-100 is bad, yet we can not judge, as they say: wait - see − denirk, 11 years ago, #
Tu-154 aircraft fleet of the Russian government. − yums, 11 years ago, #
Yeah))) look beautiful)))) − denirk, 11 years ago, #
And with the AN-2 would look nice? − ekha, 11 years ago, #
+2
Incidentally, an interesting thing: as soon as something starts to fly (ride, shoot) in the world behind the scenes and local upadochnikov case of aggravation. Flew off and thank God :-))) − Seafarer, 11 years ago, #
Incidentally, an interesting thing: as soon as something starts to fly (ride, shoot) in the world behind the scenes and local shapkozakidateley case of aggravation. Flew and nothing good :-))) − Slavyan, 11 years ago, #
+2
5
A start, but time will tell. − Alex_buka, 11 years ago, #
+2
5
I am very glad to this event! And to those who came up with the name of the first board of a separate group of five!) Is very like the way the tradition of giving the names of their own aircraft as the courts! − kirill100, 11 years ago, #
+2
5
Armenians, to you my congratulations! ) − jonny247, 11 years ago, #
+2
5
certainly surprising that the first aircraft purchased specifically Armavia, but still hopefully, who knows, maybe this is the beginning of the revival of domestic aviation industry ... − Demish89, 11 years ago, #
This is just the least surprising. Now, if it Ayzerbaydzhan bought, then yes. − FireFly, 11 years ago, #
Well I am about what he had gone abroad and not in Russia remained − Demish89, 11 years ago, #
Russia as it was not against it, but only after the Armenians themselves. You know, right? − FireFly, 11 years ago, #
so clear it all, look what would happen next .. − Demish89, 11 years ago, #
+1
5
looked first 1min14s, very much, my darling − kroll, 11 years ago, #
+1
1
This score is sent not only to the collection of assessments submitted to the video plane, which circled around in a mad dance, such as mad men, pushing a pompous speech under the bravura march, but also to those who sincerely believe that this result might be called the engineering genius of aircraft on the right . − Slavyan, 11 years ago, #
+1
Dear, while you build something yourself? − gospodin, 11 years ago, #
+5
To understand what a dish shit, do not have to be a chef. − Monumentum, 11 years ago, #
gospodin (small nick, there is an opinion that you yourself are exaggerating) course built, I am a creator, that's my position and my credo that still want to know? − Slavyan, 11 years ago, #
Of course exaggerating. I'm just a lot of things I can, and have. And do not you judge me. − gospodin, 11 years ago, #
Judge, certainly not me judge you will be a trial if there is for that. Just explain why you asked me the question is not relevant? − Slavyan, 11 years ago, #
+1
5
Well done! "Well met! − Zorgair, 11 years ago, #
+1
I generally like. And the people arguing with the man who in aviation knows much more of themselves together, then there is their assessment can not be delivered because it instantly zaminusyat some hamsters for 13-14 years ... I'm bastard, though. − Stakan, 11 years ago, #
+1
5
Super thank you very much! − edgarikk, 11 years ago, #
+1
5
Congratulations to both Russia and Armenia and Dry! Hopefully a decent airline (in my opinion) will take its rightful place in world aviation. − nonexistent, 11 years ago, #
+1
5
Well, for the Armenians can only rejoice! − daewooo, 11 years ago, #
5
это автору!!! молодец , а ПАЗик хорош) летал на нем два раза. − izopark, 10 years ago, #
КБ Сухонького, конструктор П. Крепленый ...
http://www.youtube.com/watch?v​=94EJYvew7V8