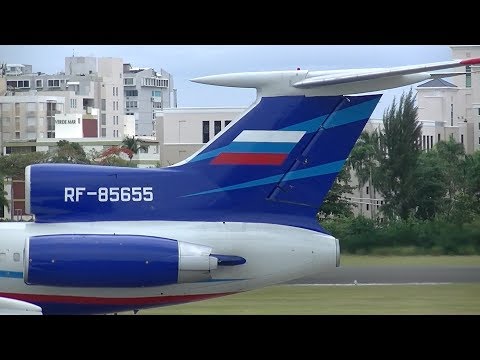 Spotting in 5/30/19 @ Luis Muñoz Marín International Airport (TJSJ/SJU), here we have one of the rarest aircraft to come across on these areas of the world: a Russian Federation Air Force Tupolev Tu-154M-LK- "Open Skies". And here I thought the US Air Force RC-135 was the highlight of 2019...

This particular aircraft is one of Russia's designated aircraft that carries-out the "Treaty on Open Skies" mission, which was the reason why it came to Puerto Rico in the first place. The aircraft departed from Wright-Patterson AFB (Dayton, Ohio), performed the mission by the east coast of Florida, then proceeded to arrive in SJU. After refueling, it departed to start the Open Skies mission in Puerto Rico and US Virgin Islands. After finishing the mission, it once again landed in SJU for more refueling and later departed at night to return to Wright-Patterson AFB.

More on the mission of "Open Skies" (From Wikipedia): The Treaty on Open Skies entered into force on January 1, 2002, and currently has 34 party states. It establishes a program of unarmed aerial surveillance flights over the entire territory of its participants. The treaty is designed to enhance mutual understanding and confidence by giving all participants, regardless of size, a direct role in gathering information about military forces and activities of concern to them.

This is the first time I see one a Tupolev aircraft, and I certainly won't ever forget it, especially the peculiar sound of those engines. Hope you like it!